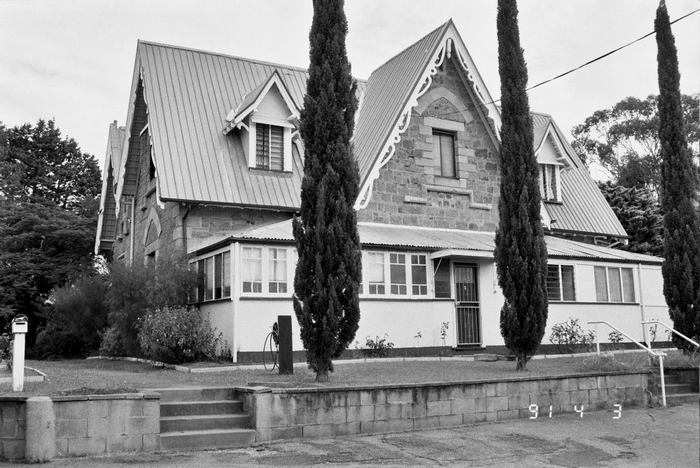 From being a residence to a number of notable personalities to becoming a parish and then a school, Bardon House has indeed established itself as the most significant home in the suburb of Bardon.

The family that built the home named it Bardon as it reminded them of Bardon Hills in Leicestershire where they used to live in England. The suburb eventually carried the Bardon name as well.

Located at 41 The Drive, Bardon, the iconic residence continues to serve the community and is now a part of the St Joseph’s primary school complex.

Bardon House was built in 1863/64 by Joshua Jeays, builder, architect, and early mayor of Brisbane. It is thought that he constructed it for his wife Sarah, who died prior to its completion.

After arriving in Moreton Bay from England in 1853 with his wife and four children, Joshua Jeays established himself as a reputable builder and contractor in Brisbane. Among his notable creations was the Old Government House.

From 1854, Jeays and his family lived in a house at North Quay.

Apart from being a renowned builder, architect, and contractor, he was also involved in local politics. Jeays became an alderman of the Brisbane Municipal Council in its foundation year, 1859 and also served as Mayor in 1864-1865.

Read: Bardon’s Blast From the Past: A Walk Down Memory Lane Through Heritage Homes

Jeays purchased two country lots in the Brisbane suburb in the first land sales for the area in November 1862. He later acquired 38 more acres of land from Francis Lyon in early 1863. This was where he built the Bardon House.

Jeays reportedly constructed Bardon House around 1863/1864. The house’s name came from Leicestershire County’s highest landmark, Bardon Hill, which was close to Joshua and Sarah Jeays’ respective hometowns of Loughborough and Beeby in England.

Unfortunately, Sarah Jeays died in July 1864 while her husband was serving as the mayor of Brisbane. After her death, Joshua Jeays retired from business and never resided at Bardon House, remaining at their North Quay residence until his death in 1881.

In early 1866, Jeays’ daughter Sarah and husband [Sir] Charles Lilley (later Premier and Chief Justice of the Supreme Court of Queensland) lived in Bardon House. However, the Lilley’s occupancy of Bardon House appears to have ended by mid-1867.

Following the Lilley’s is a succession of notable Brisbane residents and their families occupying the property for various periods of time. Famous personalities who occupied the residence included Thomas Harlin, the First headmaster of Brisbane Boys Grammar School, and [Sir] Thomas Mc Ilwraith (later Premier of Queensland).

Moreover, John Stennett from the pharmaceutical firm Elliot Brothers and his family occupied Bardon House from 1878-1886. Subsequent residents from the mid-1880s to early 1900s were stock and sharebroker Brownlow Cole and customs officer Charles William Rich, as well as Johannes Christian Brunnich, a government agricultural chemist.

When Joshua Jeays died in March 1881, his Bardon estate remained in the ownership of the Jeays/Lilley family until 1911.

Bardon House was leased to Arthur Exley who lived there with his wife Elizabeth, five daughters, and son from 1903 to 1925. They are amongst the longest tenants at the property.

Exley had an extensive career with the Department of Public Instruction and was the headmaster of the nearby Ithaca State School when his family moved to Bardon.

Elizabeth also played a prominent role in the community. Her works were related to social services for women and children. She helped establish the first Queensland branch of the Anglican missionary organisation the Mothers Union and the District Nursing Association.

After the death of the estate’s owner, Edwyn Lilley in 1911, Arthur Exley, master builder Arthur Barltrop, and solicitor Patrick O’Sullivan acquired the Bardon property holdings. The three formed the company Bardon Estate Limited and subdivided much of the land for new housing.

Allotments were offered for sale in four stages between 1912 and 1921. The original Bardon House driveway was gazetted as a road called The Drive as part of the subdivision. Five acres of land were retained as surroundings for the house.

The Exleys remained at Bardon house until the property was purchased by Archbishop James Duhig, for the Roman Catholic Church in 1925 for £2250.

The Parish of Bardon

The first mass was celebrated at Bardon House in March 1925 by Monsignor Lee of nearby Rosalie Parish. The mass was held in the central room of Bardon House, with the mantelpiece and table substituting as an altar.

Along with the official designation of the suburb, the parish of Bardon was declared in 1926. It was the 38th Parish of the Archdiocese.

Appointed in 1925, Father Max Irvine, the Chaplain at Stuartholme Convent, became the first Parish Priest of the parish of Bardon. He also resided at Bardon House. However, by the following year, services were no longer held in Bardon House, since a church-school named St Mary Magdalene’s (originally spelt Magdalen) was constructed within the grounds.

Bardon House as a School

Original plans for the parish of Bardon included using it as a school but this did not happen until 1938. When Parish Priest, Dr O’Donoghue vacated Bardon, Archbishop Duhig invited nuns of the Franciscan Missionary Sisters of the Immaculate Conception to occupy the place.

The Franciscan Sisters moved in on 19 January 1938 to establish a convent and new primary school, to be known as St Joseph’s.

St Joseph’s School was opened on 24 January 1938 with 31 male and female pupils. With the help of an anonymous donation of £1000, a separate school building located between Bardon house and the church was constructed on the site by the end of the year.

As part of Bardon House’s adaptation for a convent and school use, the north facing verandah was enclosed to accommodate a classroom. Moreover, the eastern verandah was also enclosed with lattice around whilst the stone walls of the enclosed verandahs were also rendered.

After the war era, St Joseph’s School continued to develop and grow. Several school buildings and sporting facilities have been constructed on the grounds since this time. Furthermore, most structures on the school site now date from post-2000 era.

Bardon House was added to the  Queensland Heritage Register on 21 October 1992. The iconic residence-church-school remains to be a part of the St Joseph’s primary school complex.