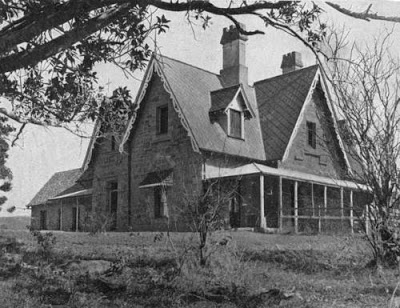 The leafy suburb of Bardon is also home to several beautifully-constructed heritage homes that delight and charm passersby. Have you stumbled into a uniquely-structured house in the area? If you do, then it might have been a part of the area’s heritage homes that holds so much history.

Just when you’re about to make that sharp bend in Simpsons Road, you will notice a Mediterranean house against the tall gum trees. The Oogarding home was built in 1940 by architect Melvyn Rylance who was commissioned by James Gervase and Edith Joyce. Gerb (Mr Joyce’s nickname) Joyce is the owner of the Helidon Spa soft drink company, where the name of the house was derived from as “oorgarding” is its Aboriginal name.

The Oorgarding home sits on a perfect location in Bardon as it’s safe from flood and has sweeping views of the city.

Joshua Jeays, the early mayor of Brisbane constructed this house between 1864 and 1926. He sourced stone from a quarry at Woogaroo which he also developed to use for the house. The two-storey Victorian Gothic structure, with a pitched roof, gables and dormer windows was passed on to his daughter. Mr Jeays never lived in the house. Some say that it was because his wife died even before the construction was finished.

In 1911, the Exleys bought the house from the Jeays. After years of living in the house, the Catholic church bought the house in 1925. I(t served as a temporary church until an actual church was built in the suburb. In 1937, the Franciscan Sisters moved into the house to run St. Joseph’s, a school. Today, the house is still part of the school.

A magical home can be spotted along McGregor Terrace. The Fairy House was built shortly after the World War II by Russian artist and architect Grigori Mekhonoshin. The uniquely designed home was intended for his daughter. When walking along the busy street, the apex of the attic is visible. When you come closer, you will see several sculptures adorning the house.

The house actually has three levels. Each level, as well as each room, has outside access. The upper level is the most interesting. It has a trap door with a ladder that provides access to the room below. Its external access is accessible via a charming walk bridge.

Vital to the evolution of Queensland’s history, the house is an example of an 1860s vernacular dwelling. The house was built by Sir Augustus Charles Gregory KCMG CMG FRGS MLC, a famous explorer and surveyor-general of Queensland in 1862. He built the house to serve as a peaceful place where he can retreat to regroup his thoughts, create, write, and invent.

Each house in Bardon has a story to tell, but what makes these Bardon heritage homes special is that they have played a huge part in the suburb’s history and served as a bridge to a time long gone but fondly reminisced.