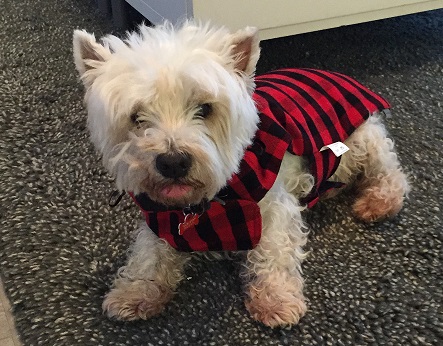 A terrier was found dead by his owners at their house in Northam Avenue on 21 April in Bardon. The dog, it seems, was brutally strangled using a towel from the owners’ clothes line. The dog was found dead, with a towel tied around his neck, and then bound to a plant at the rear of the dwelling.

The 17-year-old dog Scruffy, a West Highland terrier who has been a beloved member of Cath and Liam Proberts’ family since their daughter was six, was believed to be attacked some time between 10:30 a.m. and 3:00 p.m. on Friday. The Proberts were at a wedding when they got the phone call from their son saying that Scruffy was attacked.

Mr Proberts recalled how distraught his son was when he rang. Mr Proberts described their initial reaction as disbelief, which later grew to anger at the “unfathomable” crime. The family couldn’t help but wonder how and who could do such a horrible thing to a helpless dog. Blood was also found at the scene and the Proberts are hoping that the blood could be from the attacker.

Detectives have announced an animal cruelty investigation on Monday, seeking assistance from anyone who may have seen what happened in the Bardon residence. Police are now looking for the person responsible for the dog’s cruel death. Any related information may be reported to Crime Stoppers on 1800 333 000, or to Policelink on 13 14 44.