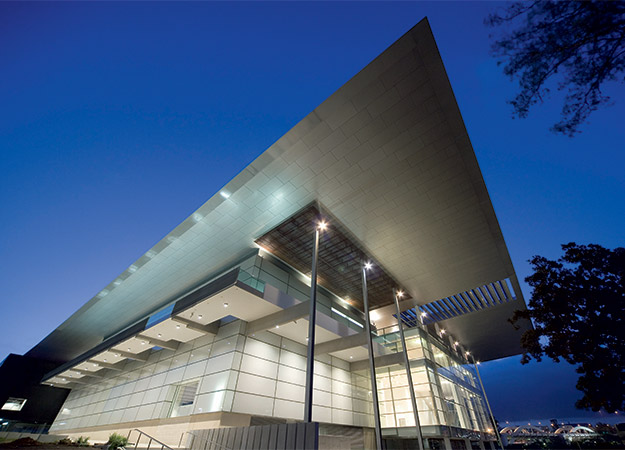 The Gallery of Modern Arts in Queensland turns ten years old this year. It has come a long way from when it was first opened in 1895 by Sir Henry Wylie Norman, Queensland’s Governor at the time.

Back in 1895, it was known as the Queensland National Gallery, and was located at an old Town Hall on Queen Street. The inaugural show featured 38 pictures, 70 engravings, and one marble bust.

In 1969 land was purchased and a permanent site for the Queensland Art Gallery was planned. Architectural firm Robin Gibson and Partners was selected to design the building. It would take 13 years before the gallery could move into its new permanent home, which happened in 1982.

Fast forward to ten years later. The Gallery of Modern Arts is now ten years old this December 2016, with more than 10 million visitors to the GOMA and QAG since the GOMA opened in 2006.

To celebrate its tenth birthday, a new public artwork by Queensland indigenous artist Judy Watson is on show, together with some free major art exhibitions.

Artist Judy Watson has created a huge molten bronze sculpture in the shape of a fishing net, which she calls Tow Row. The scupture, which was inspired by butterfly fishing nets woven by Aboriginal women and used by Aboriginal men for fishing, is a reminder of the Aboriginal presence in Brisbane.

Lucent is a collection of Aboriginal and Pacific works, showing the connections and differences between the cultures. The works on display range from majestic installations to small body adornments.

A World View : The Tim Fairfax Gift is a showcase of artworks by major international artists, all gifted by businessman, pastoralist and philanthropist Tim Fairfax to the GOMA.

Sugar Spin is a collection of over 250 artworks that explore light, space, architecture and the senses, by artists Hrafnhildur Arnardóttir, Nick Cave, Carsten Holler, Ron Mueck, and Céleste Boursier-Mougeno.

A special degustation 7-course menu has been created to celebrate GOMA’s tenth anniversary. With a menu created by Brisbane artist Elizabeth Willing and QAGOMA executive chef Josue Lopez, the menu and its beverage pairings are inspired by Sugar Spin: you, me, art and everything. The degustation experience is set for Thursday, February 23, 2017, at the GOMA Restaurant. Click here to buy tickets.